Life in China and meeting Mr right, by Lizette Bremer 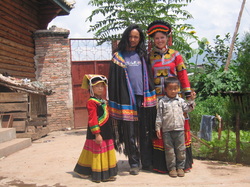 Yangshuo, China－Author V.V. Aku has always believed in beautiful stories. She found the man of her dreams and her way in complex China, and wrote her own fairytale: The Fire of Dawn－a scintillating tale about strength, alienation, and a girl who dared to follow her heart. “I wouldn’t be able to live in The Netherlands anymore.”

After nearly a decade in the middle kingdom, V.V. Aku (born as Veerle Ackerstaff in Breda, The Netherlands) is still a sober, Dutch girl. With her long blonde hair and radiant smile, she gets noticed in this mysterious country full of ambiguity. She’s always cheerful, disarming, and without prejudice, and she’s had to face many obstacles before she could feel at home here. “But because I look different, I’m also allowed to be different. It took a while, but China is my home now. Here lie the roots of The Fire of Dawn.”

“As a teen, I always felt restless and older than my age. When I turned fifteen, I was ready to leave and travel the world, but I couldn’t. It was a nightmare. Not just for me, but also for everyone around me. I felt trapped and so unhappy.” On her eighteenth birthday, after graduating from high school, Veerle bravely booked an open ticket and left for Asia. “I wouldn’t have lasted one more day in The Netherlands.”

It was in Thailand that Veerle embarked on her wonderful journey, which eventually took her all over Southeast Asia. Via Vietnam and Laos she ended up in Lijiang, Southwest China. “I got snowed in, so I was forced to stay there for three weeks. I didn’t mind and spent most of that time working on some short stories. I was immediately drawn in by this ancient town. Then I received a call from home. My dad was diagnosed with colon cancer and I took the first flight back to The Netherlands. It was a very difficult time for me.” Although Veerle was happy to be there for her father, the call for adventure kept gnawing at her. “I really felt lost. Then I met some people who taught English in Asia and immediately decided to work on my English skills and get qualified. When my father went into remission, I left for Bangkok to get my Cambridge Teaching Certificate.”

She is immensely grateful that her father was able to join her shortly after. “Together we travelled to China. That was amazing.” It was in this period that Veerle got to know the real China en fell in love with its mysteries and quirks. “I wanted to go back to Lijiang. Something about the historical town fascinated me. Once there, I found a job as an English Teacher at Yunnan University College for Culture and Tourism. For one year, but that worked out quite differently.”

Exactly one week after she started work at the university, she met the love of her life. “I wasn’t looking for love. That same night I had told a Chinese friend in a bar, ‘who needs men?’ I saw them as recreation at most. My friend introduced me to trekking guide Anzi Aku. We started talking and I immediately knew: this is trouble. Instinctively, I felt that soon I would have to sacrifice my freedom to this wild, long-haired man. I knew it: this is him.” A month after first meeting Anzi, Veerle received a call from him. “If I wanted to have a traditional Black Yi meal with him. The Black Yi are an ethnic minority that live in the mountains of Yunnan and Sichuan. Anzi was born and raised in a Yi-tribe village on the border of Tibet in Yunnan province. We talked and talked. We were that curious about each other. Afterwards, we went for a drink. Sparks were flying, but he didn’t make a move. I was desperate, feeling an enormous attraction to him, but I didn’t know what he would think if I made the first move. After my lust got the best of me, I just asked, ‘Why haven’t you kissed me yet?’ He looked at me and then ran to the bathroom! That was horrible. I thought that I had truly offended him. After ten minutes or so, he came back, swiveled my chair, and kissed me so passionately that I nearly crawled out of my skin. That turned out to be one of the best nights of my life.”

“For a while I didn’t hear from him and naturally I got worried. So, I decided to give him a call and thank him for dinner. Very casually. He asked me if I would like to go out again, to which I eagerly replied, ‘I’d love to.’ A heavy silence followed. Even today, Anzi still claims that I said, ‘I love you.’ We laugh about it now. He must have thought that I was some sort of stalker freak. But, regardless, we fell madly in love.”

That Anzi was married and had two small children, Veerle didn’t know until they had been together for one year. It was a terrible shock. “He confessed that he was stuck in an arranged marriage and had two kids. He had never told me, nor did he carry any pictures of his kids or go back to his village for that matter. He said it was a loveless marriage and he was afraid that had he told me sooner, I would have run for the hills. He was probably right. I was so angry and hurt.” Still, after many painful arguments, Veerle and Anzi conquered their crisis. Anzi decided to openly choose Veerle and end his marriage, which caused a lot of drama for his Yi relatives. “We had to go into hiding. We had caused so much shame to his family. The Yi live in clans that prior to Mao Zedong ruled Yunnan, South Sichuan, and some parts of Tibet. They still don’t have any regard for Chinese law. For these people, the clan is everything. Getting divorced was unheard of and especially not so that Anzi could get involved with a western woman.”

After three years of living in hiding, in which Anzi and Veerle had to move to another city and weren’t able to be seen in public together because of the spies Anzi’s wife’s parents had sent out to hurt Veerle, Anzi’s family finally realized that their love couldn’t be destroyed. An unthinkable decision was made. De clan accepted their relationship and started the tedious process of the divorce. “It was horrible but worth the battle. Through this hardship, Anzi and I grew close. The mother of his children loathes me. I understand. To her, I am the blonde witch that stole her family.” Her two children, Shiguo and Shibu, went to live with Veerle after the divorce was finalized. “I was only twenty-three at the time, but all of a sudden had to take care of two small kids. After her split from Anzi, their biological mother took off to work in Guangzhou and even though it’s not far from where we live, she only comes to visit once a year and she never calls. The kids now call me mama.”

On November 18, 2008, Anzi and Veerle got married in his village according to traditional Black Yi customs -- an extraordinary celebration where east and west came together. “My family and best friend were present at the ceremony, which lasted three days. They all knew, even though life was tough, that I was happy here with Anzi. I have never laughed so much in my life as during my wedding days, complete with culture shocks, slaughtered pigs, water fights, and traditional chases.

It’s in magical Yangshuo that Veerle got the inspiration to write The Fire of Dawn. She founded her own business which offered teachers the opportunity to get an internationally recognized teaching certificate. “It was hard work. I worked sixty hours a week and had to take care of my family. Doing business with Chinese people is difficult for foreigners and very frustrating at times. Dealing with different ideas about quality control and the endless brown nosing in order to get on the good side of important government officials is something that I’m definitely not cut out for.” When her father passed away in September 2009, after a long battle with cancer, Veerle sold her share to her Business partner. “My goals in life suddenly became clear. It was at that moment that I really chose for a life in China. I was no longer stuck in my adolescence and found peace. I realized that I was free. Life is too short to be stuck in a job you don’t like. I live here without restrictions. Without clichés. Here, I don’t experience the pressure I would feel if I lived in The Netherlands, striving for a succesful career and being successful. I am allowed to swim between two cultures and that feels awesome.” In three months time, she wrote The Fire of Dawn, the first in a series of young adult fantasy novels. “I was possessed by the characters in the story.” Even as a child, Veerle scribbled as though her life depended on it, fascinated by fantasy tales like ‘Lord of the Rings’. Although completely fictional, The Fire of Dawn reflects on Veerle’s journey; from feeling the bitter taste of alienation as a teen to following her heart.

Of course, she sometimes misses The Netherlands, especially her family and friends. The cultural differences and cruelties that are an integrate part of China will always be difficult. But she realized that if she truly wants to be happy here, she needs to let go of her Dutch mindset. This proved to be the final key to her happiness. “I wouldn’t be able to live in The Netherlands anymore. I have created my own world here, in all its simplicity. I draw inspiration from the fact that I am free and do what I love most. That, and my beautiful family.”